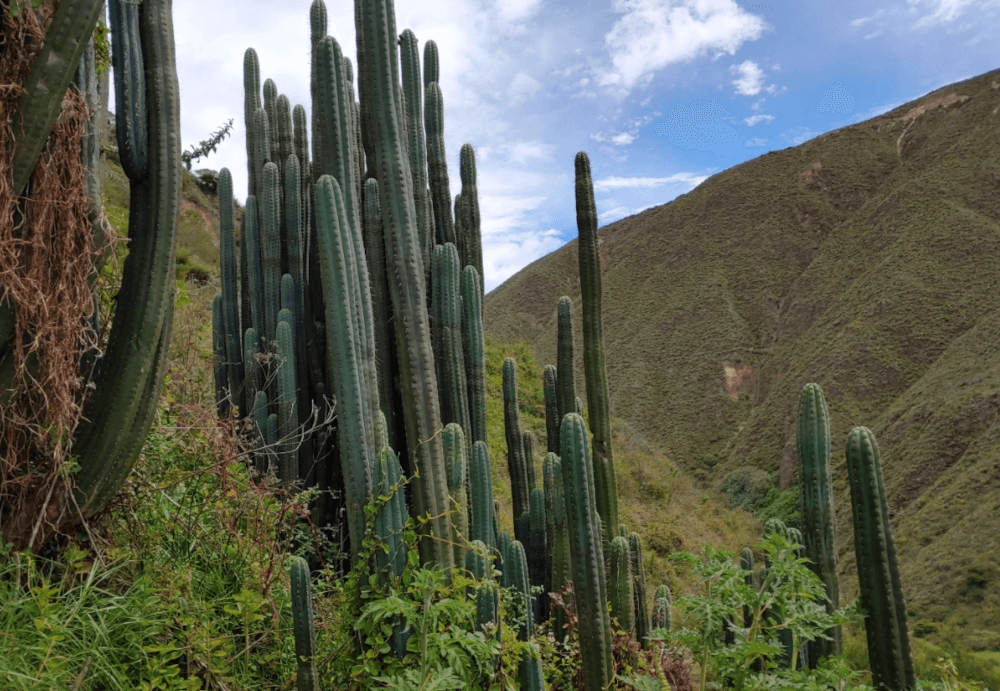 What is San Pedro?

The San Pedro cactus (wa-choo’-ma) is one of several cacti that produce the psychoactive alkaloid mescaline, which gave rise to the term “psychedelic.”

The massive and short-lived blooms of San Pedro make it a popular ornamental and landscape plant throughout the Andes. Cactus flowers only open at night and for a few days, sometimes only for one night before decaying. The cactus produces fruit after pollination by night pollinators like bats.

After the Spanish conquistadors invaded, the huachuma cactus became known as San Pedro, or St. Peter. For millennia, Andean cultures have used medicine in ceremonies to promote physical and spiritual health.

Invading Spanish missionaries condemned the huachuma ceremony as devil worship, and colonialism nearly wiped out traditional ecological knowledge and cultural practices. Nonetheless, the missionaries’ ideology claimed: “this is the plant with which the devil deceived the Indian.” San Pedro has been used by Peruvian healers for divination and disease treatment.

San Pedro is usually taken as a dried powder or as a cactus tea. Using a live cactus makes dosing difficult due to uneven mescaline distribution. The usual dose is 20-500 mg. The onset can take 1-3 hours depending on metabolization rate and last 10-12 hours.

A mescaline active dose usually lasts less than 24 hours, with visual effects lasting 10-12 hours. Sound and color distortions, as well as synesthesia, can occur. San Pedro consumption may cause intoxication, but not death. Animal studies have reported mescaline deaths, but these were at levels unlikely to occur in a San Pedro ceremony.

San Pedro contains more alkaloids than mescaline. Surprisingly little research has been done on these alkaloids’ entourage effect. San Pedro also contains anhalonidine, hordenine, and tyramine in varying concentrations. Consuming cacti containing mescaline rather than pure mescaline will result in a different experience due to the inaccuracy of dosing and the effects lasting longer.

It is widely assumed that the external green tissue contains more mescaline than the internal white tissue near the center of San Pedro.

There is no standard way to prepare for a San Pedro experience.

A traditional San Pedro ceremony will require more preparation, such as avoiding alcohol, meat, and rich foods. Some providers advise meditating, journaling, and other spiritual practices before the ceremony. San Pedro is also consumed in traditional ceremonies by a Yachakkuna (local healer).

A mesa, or altar, containing meaningful items gathered by the Yachakkuna over time, will likely be built before the San Pedro ceremony. These objects are placed precisely to shape the experience’s energetic container and transfer power to the healer. Depending on the Yachakkuna and the ceremony’s intention, they may offer a traditional sacrifice (guinea pig).

Intention setting and self-reflection are important pre-psychedelic activities. Arriving at San Pedro with gratitude and reverence for the plant teacher who makes healing possible is also advised.

What to Expect in San Pedro

San Pedro will almost certainly produce a different trip than isolated, synthetic mescaline. Each cactus grows differently and contains different amounts of alkaloids, including mescaline, ranging from 150 mg to 1.2g per 50g dried cactus. San Pedro, unlike mescaline, cannot be dosed precisely according to body weight.

Cactus powder made from dried cactus or a decoction made from cactus slices boiled in water. Traditional ceremony participants receive a lower dose than the healer and may not be psychoactive. Depending on the disease’s cause, the Yachakkuna may prepare additional plants for treatment.

The tea is bitter and nauseating, and many people vomit after drinking it. The effects usually start 15-40 minutes after drinking the tea and build up over 1-3 hours, peaking around hour three or four.

San Pedro effects can last 12-14 hours depending on dose and physiology. The active phase can last up to two hours, with a relatively easy comedown and an overall experience more like MDMA than LSD. This post-peak period is ideal for reflection and pre-trip integration.

San Pedro, or huachuma, contains mescaline and is one of the oldest known visionary plants used by humans.

Chavin culture is named after an ancient religious site in Huantar, Mexico. For an ancient Andean society spanning a vast geographical area, the location was vital. 8,000-year-old fossils of San Pedro use have been discovered in several ancient sites.

The use of San Pedro, or huachuma, is thought to have influenced many aspects of Chavin culture, including ceramics, sculpture, and architecture. The Quechua term means “head removal.”

San Pedro grows in the mountains, but not in the Chavin de Huantar area. This ancient culture may have begun cultivating the mescaline-rich cactus for sacred purposes.

Sculptures and artwork throughout the site show Huachuma being transported for ritual and group ceremonies. People consuming San Pedro and transforming into jaguars and other animals are depicted in the carvings at Chavin de Huantar. Some archeologists believe that ceramic containers with cactus-shaped pouring lips were used to serve and share traditional San Pedro tea.

Traditional Andean healing practices and religious ceremonies associated with huachuma were hidden and merged with settler religious ideologies. San Pedro, or St. Peter, guards the gates to heaven, a nod to huachuma, which also opens the spiritual realm.

In a traditional ceremony, Yachakkuna healers carry on the lineage and care for the community’s health. The Yachakkuna eats the mescaline-rich cactus to gain insight into a patient’s illness. San Pedro thus serves as a diagnostic tool for determining the causes of physical or spiritual disease.

San Pedro has long been revered as a marriage and family protector, and it is often planted near homes. Other mescaline-containing cacti are protected religious sacraments, but not San Pedro.